France Trip | Behind The Scenes

David and I have been home for almost a week from our France trip and I am so excited to be sharing about our trip!

As David and I travel, I have noticed that we don’t really take our big cameras out and that is same with our phones! Still trying to decide if this is a good or bad thing! haha! We love being present and really enjoying the scenery when we go somewhere. If we do take photos, it’s for Snapchat or Instagram Story. If you follow us on there, I am sure you have seen majority of the photos I am sharing on today’s blog post. What you might not already know is what happened everyday while we were there. So, I am going to share just that! 🙂

Shortly after putting our deposit down, Jaime and Stephanie asked us to model for them at the workshop for the “engagement” part of the workshop. We also got a call from Jaime (which David was behind it too) about coming a few days early to tour Paris and model in front of the Eiffel Tower, so we planned on that! 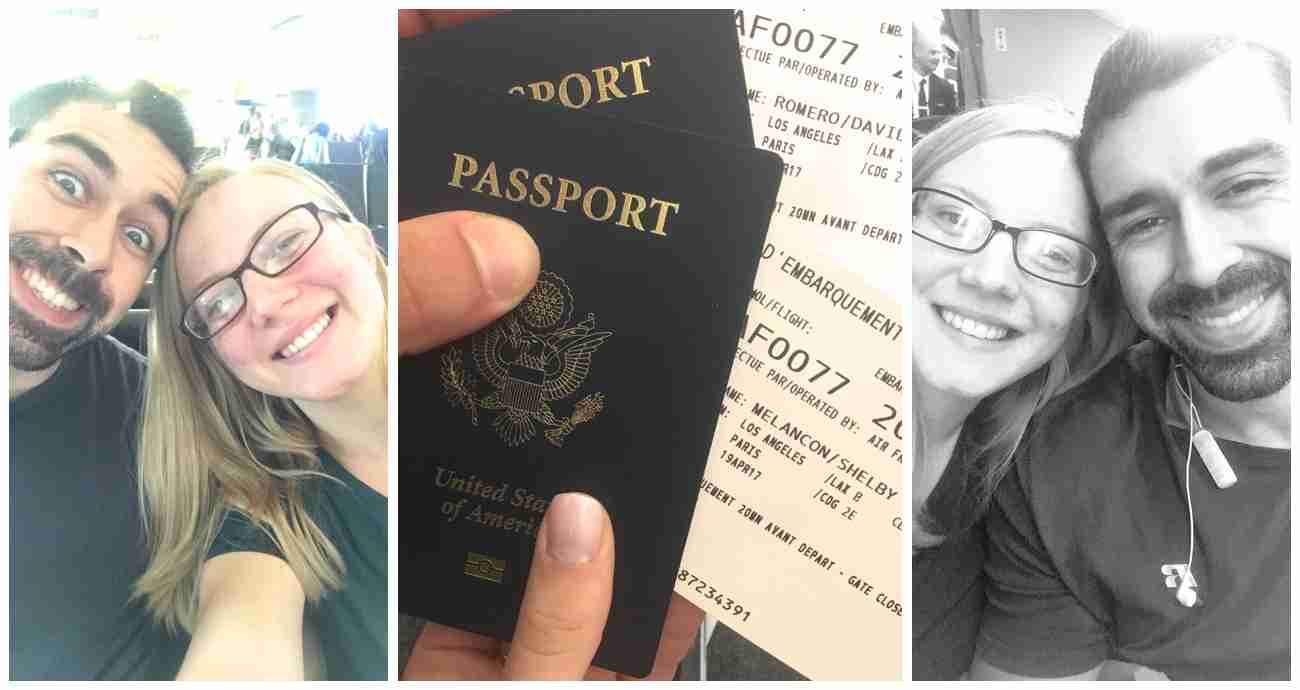 We left for our long 11 hour flight on Wednesday night. I was starting to get sick with a sore throat, ear ache, and sinus pain the night before. By the time we boarded our flight, it was a full day full of lots of cold medicines and ready to sleeeeep! Luckily I was able to sleep most of the flight. Unfortunately, David only got 1 hour. Which was so weird, because he can usually sleep anywhere and anytime! haha! But he survived it 🙂

The following day: Our flight landed a little early and landed at 3:30PM and we were so excited because we could tour the area a little bit more! Welp, we were wrong! The metro that was only suppose to take 40 minutes to get to the flat, took us 2 hours. Whew! From what we have heard and understand (thankful for nice French guys for translating for us! haha) is that there was some metal on the tracks and all the metro trains were trying to go around it, so it caused all of them to delay and stop at every stop for 10 minutes instead of less than 1 minute.

But once we got off the two hour metro ride, we still had some day light (the sun didn’t set until 9/10 PM every night.. which threw us off! hahah). We ended up catching up with the friends we were staying with and got dinner before we knocked out for the night.

On Friday, we went to Disney Paris! OH.MY.GOODNESS!! If you go to France and are near Paris… and a Disney lover, make the investment to go! We grew up and live by Disneyland here in SoCal and we really wanted to go here. The pictures above aren’t photos of the entrance.. That is just the hotel before the entrance! So pretty! 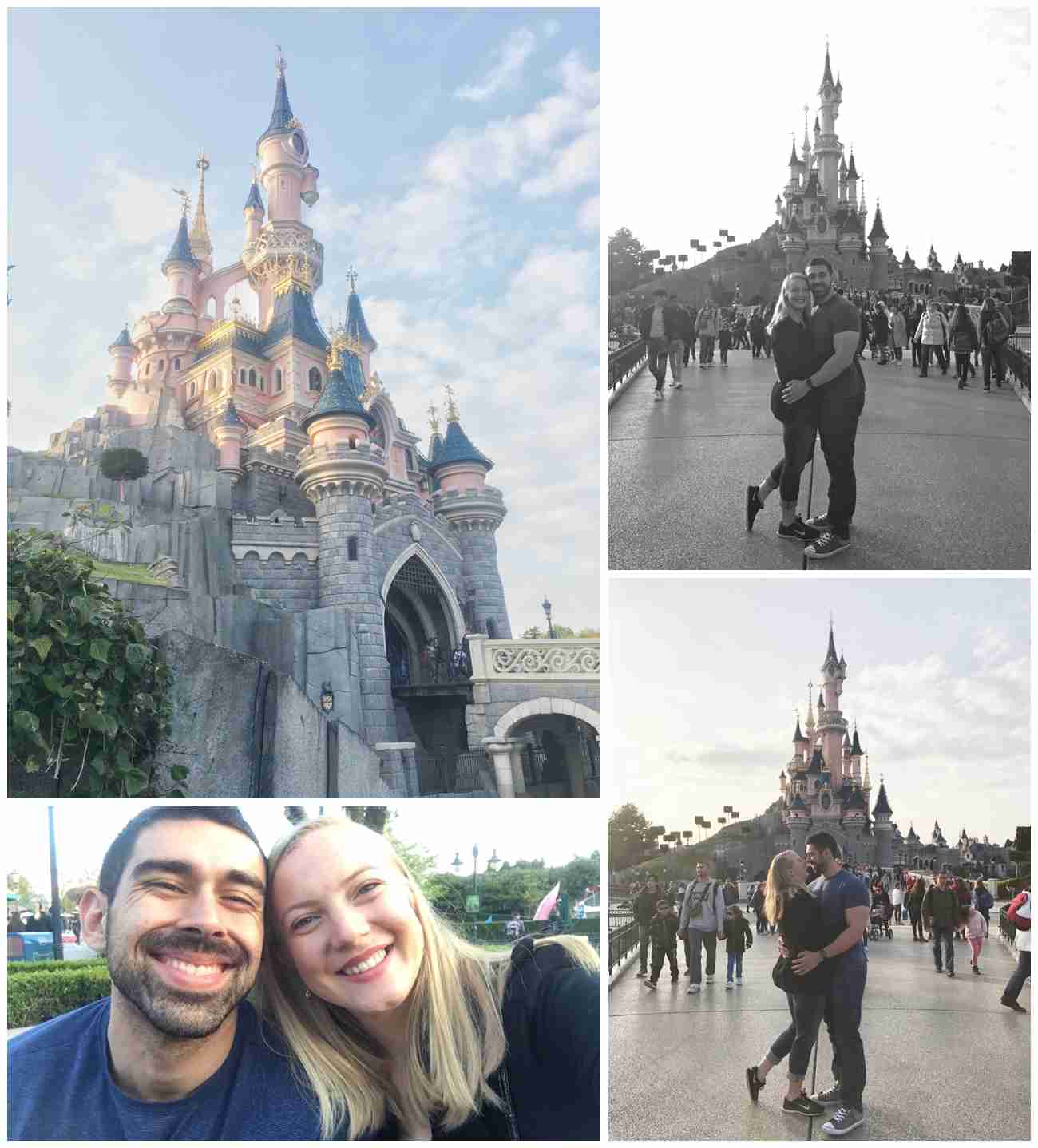 We were blown away how big the castle was there, compared to the Disney at home. We loved all the scenery and the rides were so high tech! We hope to go again some day!

After a full day at Disney, we headed “home” and didn’t get back until after midnight. Welp, we were having to wake up within 4 hours once we ended up getting into bed. David got his full 4 hours of sleep, while I only got 30-60 minutes of sleep. Why did I get such little sleep? Well, David and I were still getting over our cold (he was only coughing really hard at night/in his sleep) and he coughed and it woke me up. But once I was awake… I was AWAKE. I could not fall asleep. I could not fall asleep because my heart was racing and my emotions were going wake. Why, you might ask? Because I had a huge feeling this was going to happen:

I was so restless, excited, nervous, etc. that it was going to happen… and… IT DID!!!!! These photos were the photos we took on our phone to send to family and friends after we called/facetimed them! 🙂 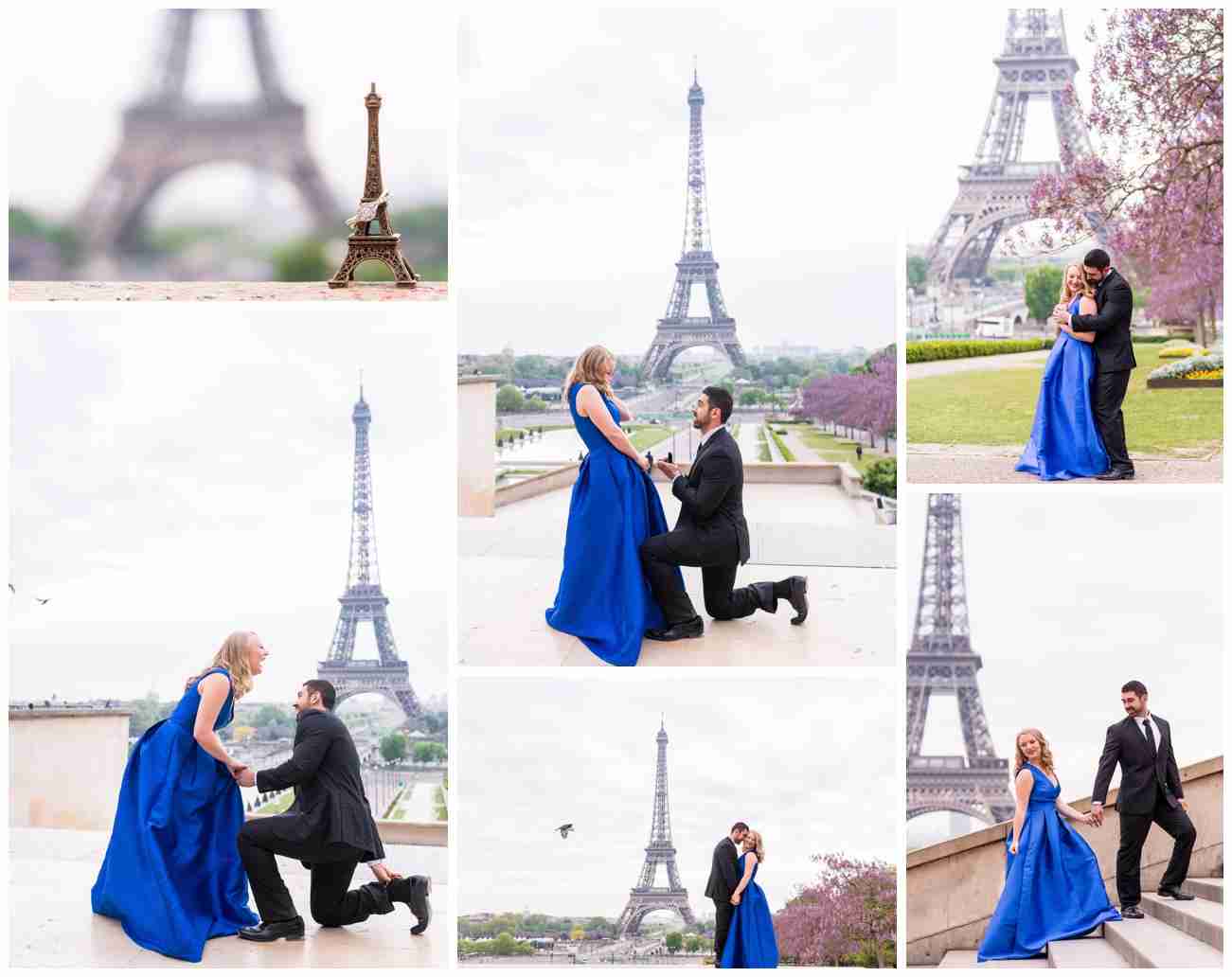 Of course Jaime Davis Photography and David had this planned ever since last year when she first called to ask for us to “model” in front of the tower!

Don’t worry, once we get the rest of the photographs from her, I will tell the whole story! 🙂

After the shoot/proposal, we were suppose to tour Paris and enjoy the time of being engaged! Unfortunately we didn’t have the chance to see other major parts of Paris because we not only were exhausted (again, I was only running on less than an hour of sleep and was tired from the Disney day) but I was still sick. We went to take a short nap, but the nap ended up being almost all day. We were sad to miss touring the rest of Paris, but I felt so much better to have all that extra sleep. 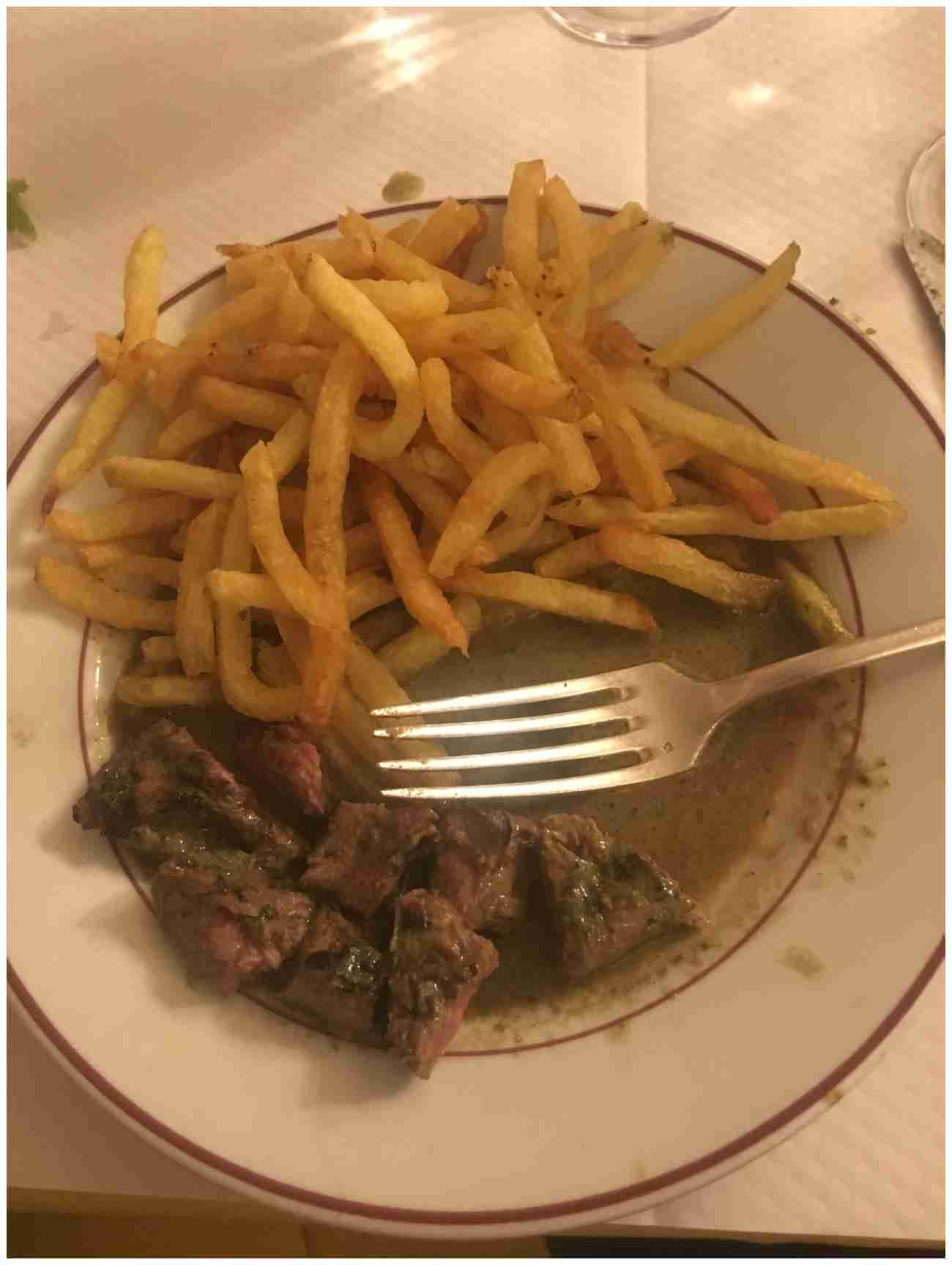 I will add, we did wake up for this amazing dinner! It was a restaurant where they only sell steak and fries. You sit down and they simply ask, “How do you want your steak?”

They give you one plate and then serve you another plate. It was SO.GOOD. Wishing we had more! hahah! 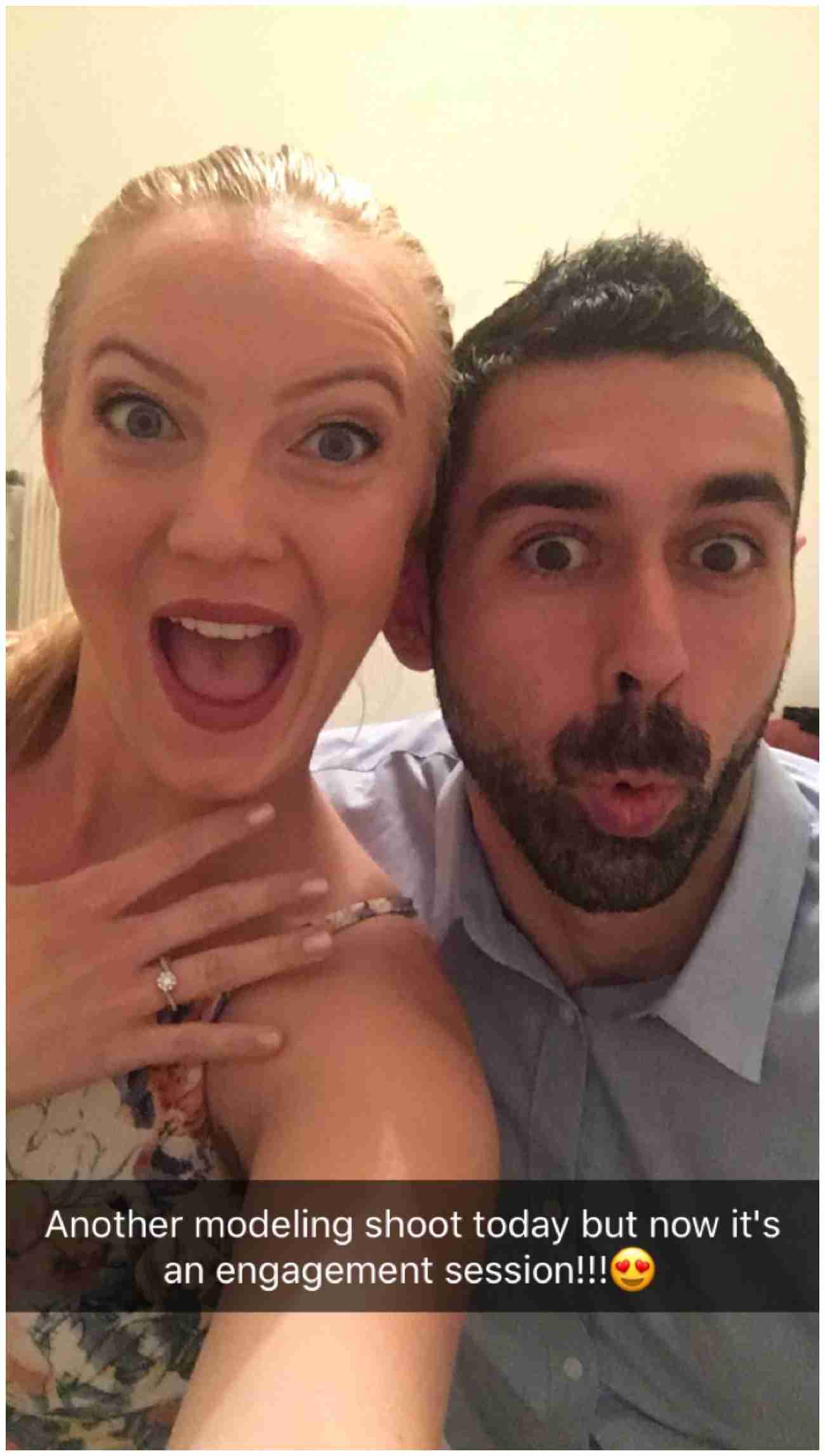 Before we arrived to Paris, another photographer found out we were going to be there the same time she was. So we were going to model for her too. Since we got engaged the day before, it was our first engagement session (other than the one we had for the proposal.)

Jaime purchased a lock for us to lock for this shoot and we couldn’t be anymore thankful!

The “Love Locks” bridge in the city was down, so we found another area to put it. 🙂 Michelle, the photographer took photos of us locking the lock and throwing the key, but we also have our own key for ourselves too. 🙂 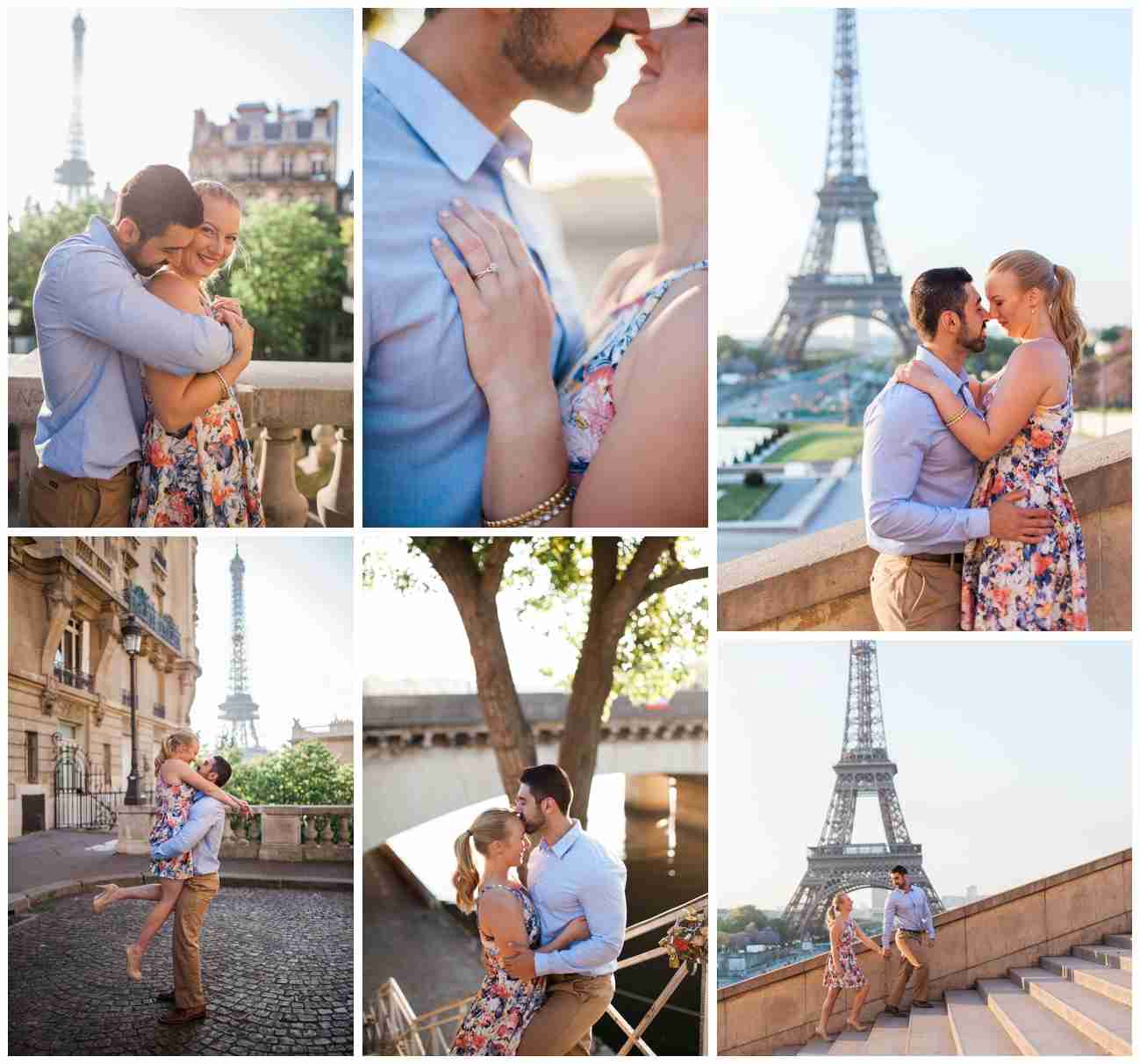 ^This middle picture is us after we threw the key.
You can see our lock right by us 🙂 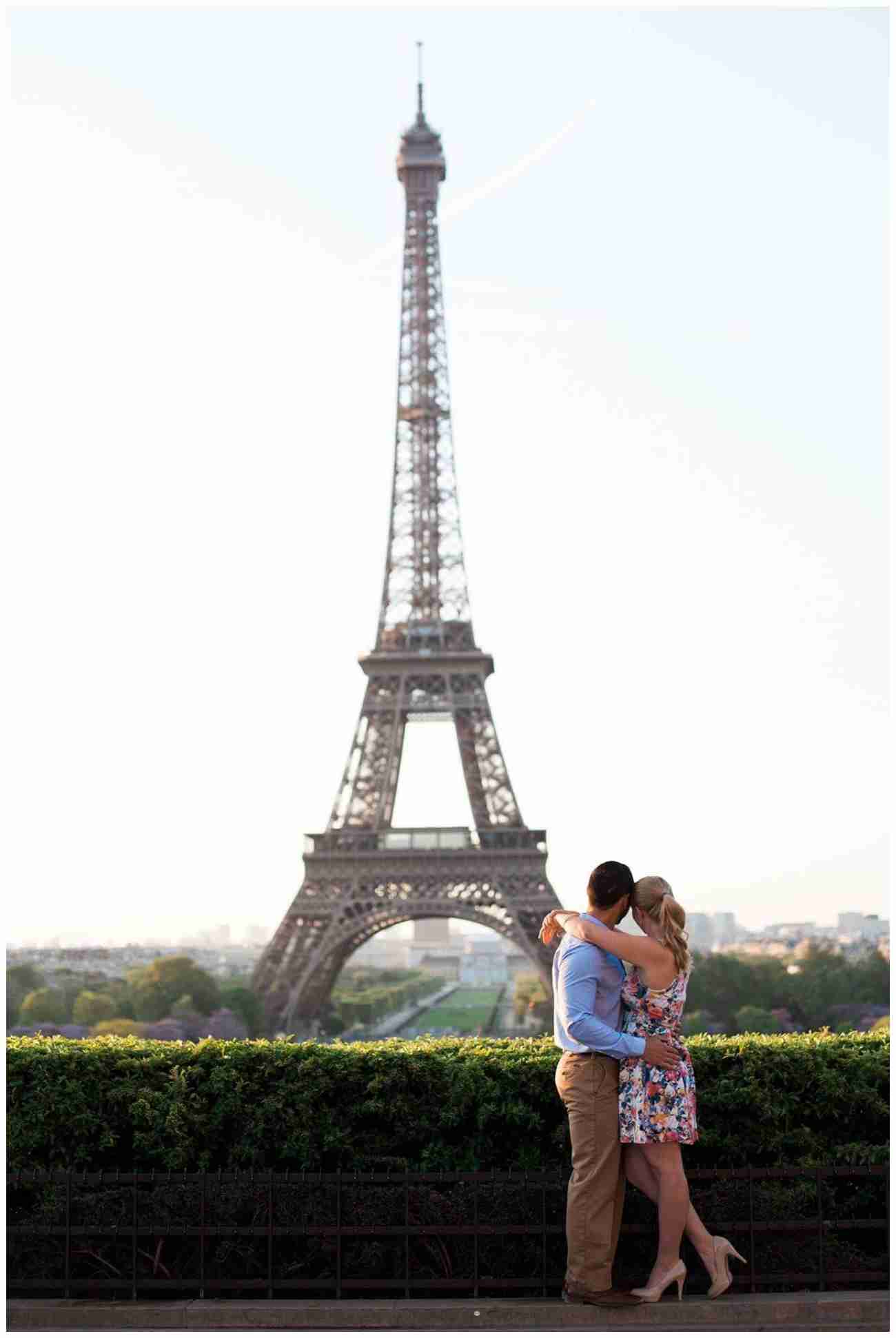 Thank you, Michelle, for the beautiful photos and a fun session!

After our sunrise session with Michelle, we were getting ready to head to the workshop. Before leaving, Jaime asked if I can capture some photos of her with her little AnnaBelle in front of the tower. For all that she has done for David and I, I could not have felt anymore honored to help her. 🙂 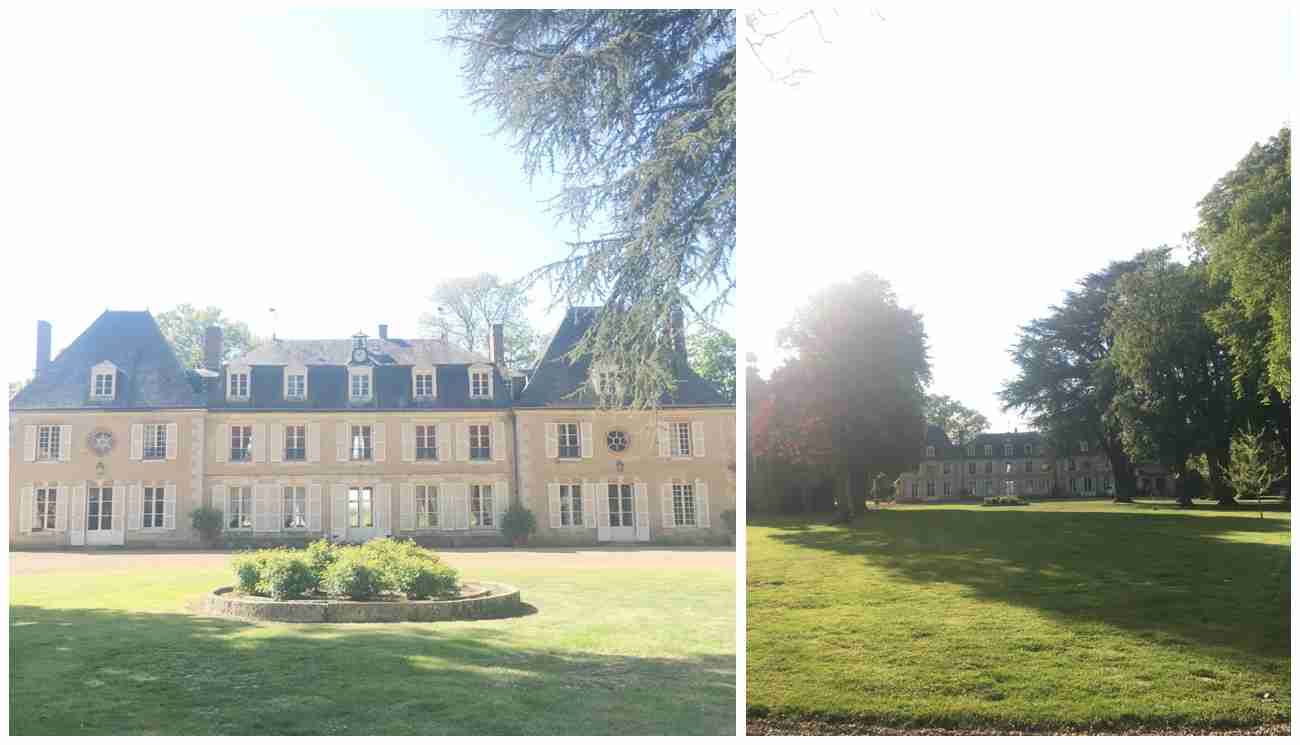 Later that day, we took the train to our Chateau! Isn’t it GORGEOUS!? I wish I took more photos of the place. Inside and out!!
It is over 200 years old and the owner still lived on the land. He was such a sweet man and so fun to be around.
We enjoyed learning about his land + houses as it was full of his family’s history! 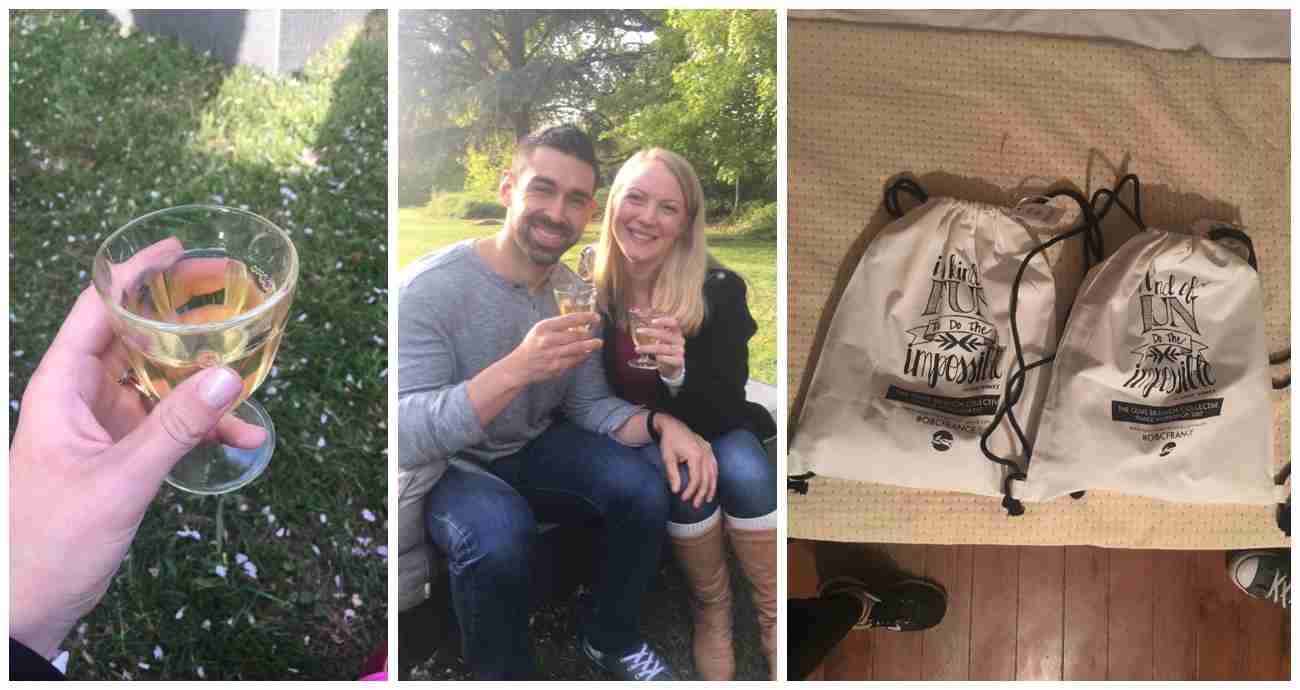 At the Chateau, there was a wine cellar and he had us try some of the wine! During this time, it was the first day of the workshop and it was the day that all the other attendees arrived. (Which was the following day we arrived) 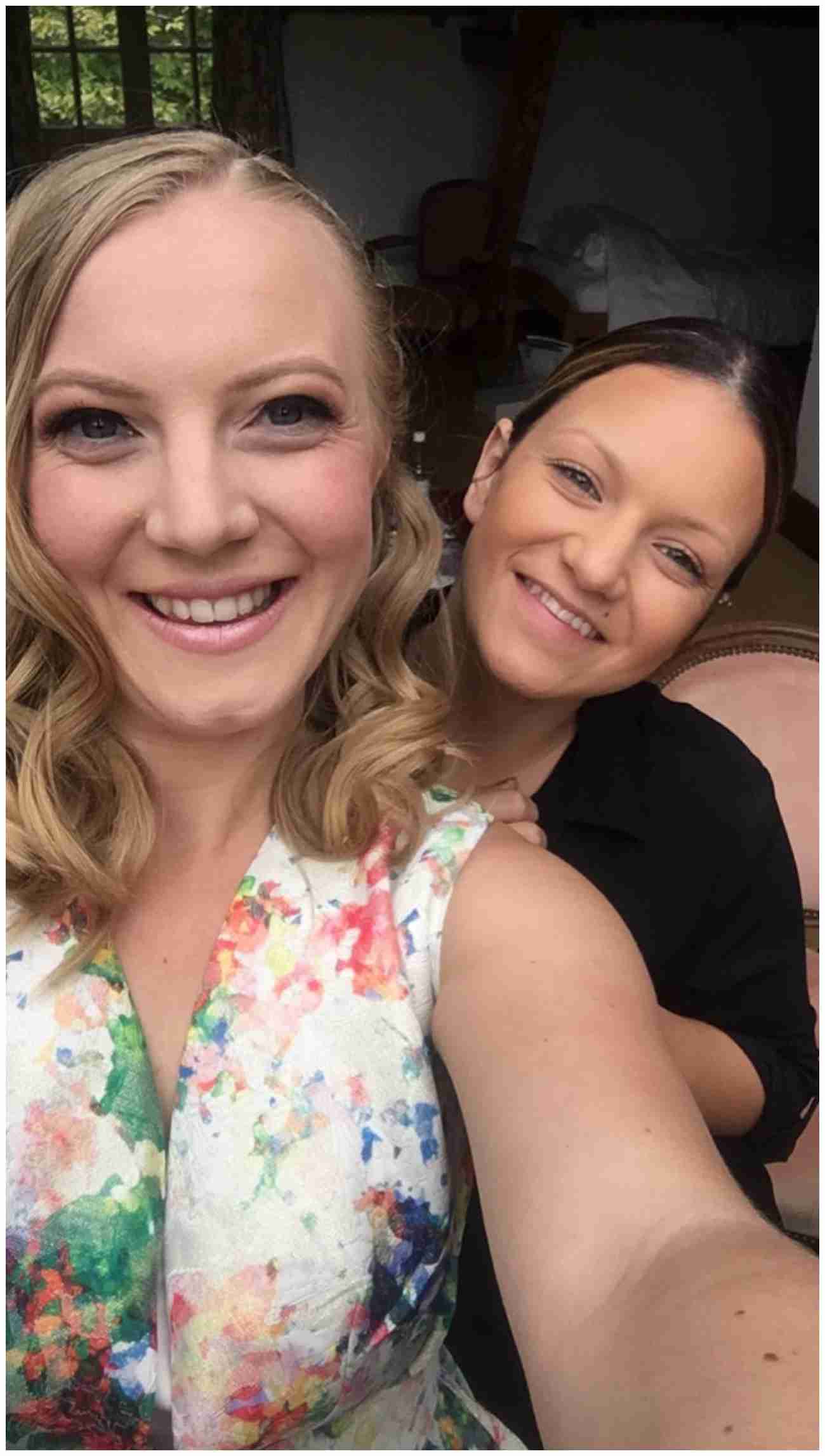 Tuesday, the second day of the workshop, was the day we learned more about engagement sessions and this is the day David & I modeled!

Since we can’t share (or haven’t received) any of the photos, we will share it once we can!

We can’t post any until the photos get published 🙂 So, stay tight for the next couple months (or sooner!) hehe!

We didn’t take photos on Wednesday, because it was a full day of staying warm inside and learning! Though, it did snow slightly that got us distracted for a bit! (We didn’t get photos, only videos.)

On Thursday, we all traveled to Palace of Versailles for the day. Such a beautiful place!!

We had a scavenger hunt/bingo game of taking photos there of such random things! With mine and David’s determination, we won! Woohoo!! hehe! The photos above are just SOME photos that we had to take or we took for fun. 🙂 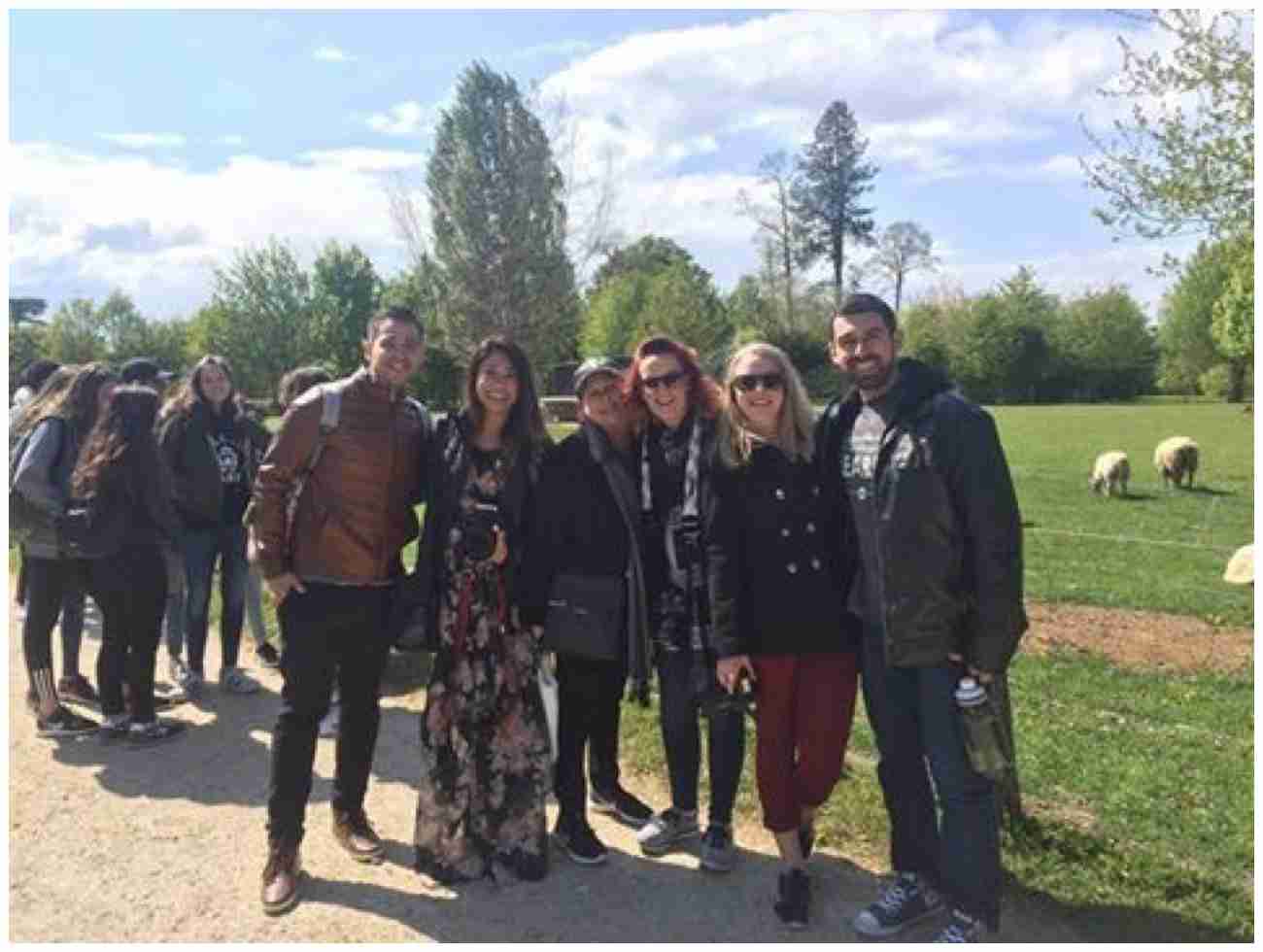 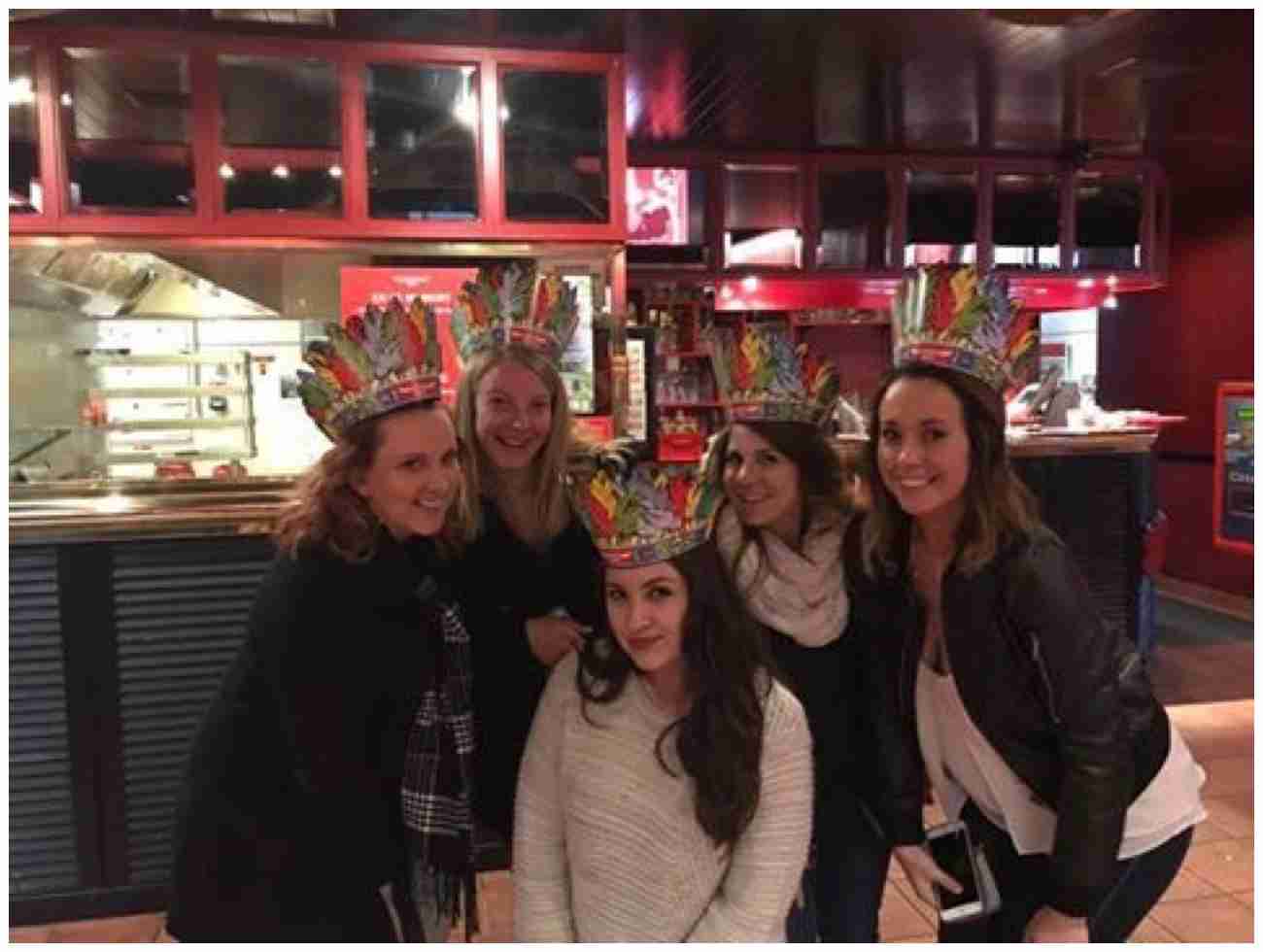 We also went to a restaurant in a small town after Versailles and of course we snagged some kid crowns! heheh! 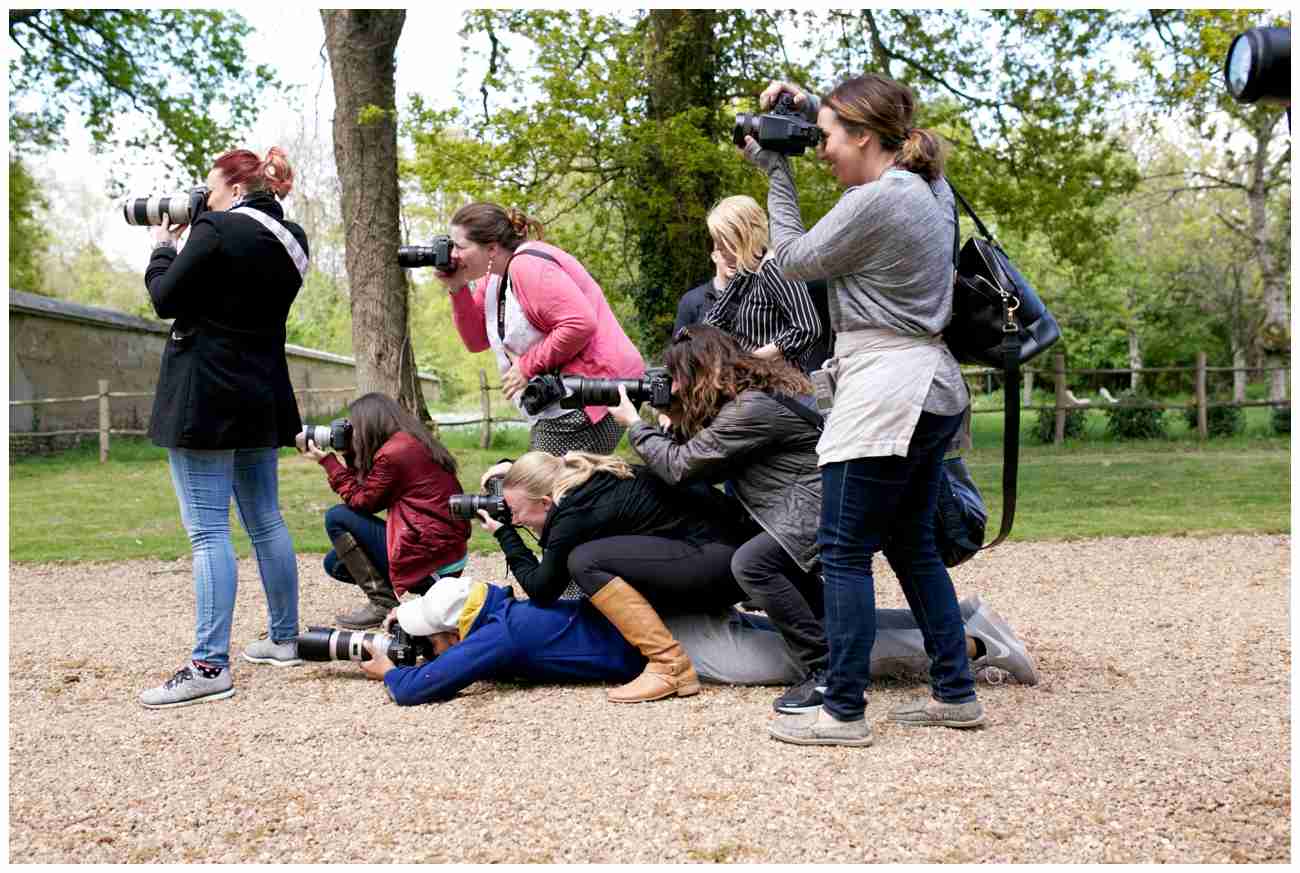 Friday was a full day of shooting a wedding mock up!

Again, we can’t sure any just yet! But I LOVE this behind the scenes photo David captured! hahaha! 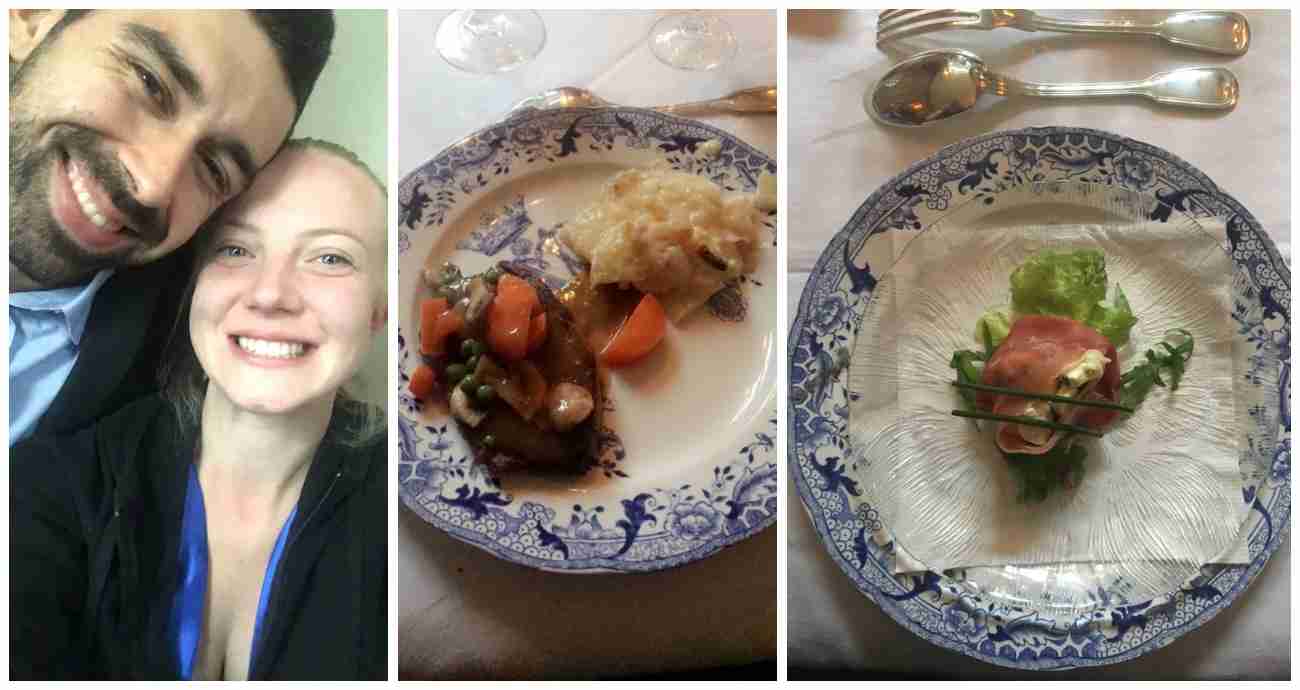 Since it was a wedding mock up, we got to play as “guests” and have a “real” reception. We had the chance to dress up a little and have a really nice + fancy dinner that the OBC team gifted us! It was SO tasty and nice. We all enjoyed the meal + some wine, music was playing in the background, and some dancing + lots of singing happen. It was a blast and couldn’t believe it was already coming to an end!

The next day was a travel day!

We headed home and after 21 hours of traveling, we finally got home safely! 🙂

I hope you enjoyed reading a little bit into our trip and I am SO excited to share more photos in more blog posts of our proposal, our engagement session, the time we modeled for the other workshop attendees, and what we captured for the mock up wedding shoot. 🙂

Thank you so much for reading and following along!